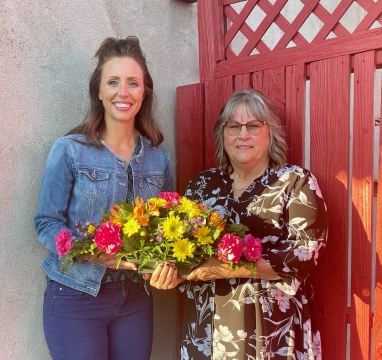 Stacey VanBoening, ARPN, Phelps Memorial Oncology, told those in attendance that her passion is helping her patients through their cancer journey.  Another passion is educating about cancer prevention, awareness, and screenings and mentioned the great team of primary care providers in the community.

“It starts with our primary care providers,” she said.  “They are so well educated on screening processes and getting tests and scans set up for our patients.”

Mrs. VanBoening said, “They are top-notch. They don’t leave a single rock unturned and just do a fantastic job for our patients.”

Mrs. VanBoening serves patients in-house full-time and stated she’s “Incredibly proud of what we have to offer for our very special patients.”

She informed guests of updates on the growth in imaging services at Phelps Memorial including new construction that is underway to install a PET CT scanner, a service that is currently offered on a mobile truck.  The department will also soon be offering Breast MRI and stereotactic biopsy (a mammography-guided breast biopsy).

She said the expansion of the services offered are so we can catch cancer early, prevent cancer and if we find it, treat it.

The keynote speaker for the evening was Anita Davis, a cancer survivor from Grand Island, who began her cancer journey in 2005 although her first appointment wasn’t until 2010.

She shared that she has a rare cancer called adenoid cystic carcinoma of the Bartholin gland, which is aggressive but slow-growing.  She had an extensive cancer surgery in January 2011.  Her doctors agree that her cancer started in 2005 when she first had symptoms.  Her cancer had metastasized to both lungs in 2016.

She said, “I’ve learned to laugh.  It’s a different life and it will never be the same.”  She added, “I’ve had to accept it as it comes.  If I were to dwell on it or be upset it wouldn’t do me any good.”

She told the crowd that in 2018 she began to have problems again which led to 35 treatments of radiation and now calls herself a “four-time cancer survivor.”

She shared her journey and encouraged patients to be their own advocate and learn as much as they can about their cancer, especially if it is rare.

“When I was diagnosed there wasn’t much out there on it. They thought I was number 68 in the world to ever have it,” she said.

Being an advocate means working together with your doctor as a team to come up with the best treatment plan for you and work alongside your physician to choose the best course of cancer treatment.

By advocating for yourself (or loved one) you learn as much as you can about your diagnosis, know the risks and benefits of treatment options, and what treatment fits best.

She said, “It was such a rare cancer that I had to trust that doctor with my life.”

In December 2015 she got a cancer-free check-up, but in February 2016 began not feeling well and that’s when she learned the cancer had metastasized to her lungs.

Mrs. Davis shared that she has had faith through her journey and ”Never once got angry at God. Some people get angry and say why me?  I said, why not me? Statistics said one in three women will have cancer in their lifetime.”

“I want to make the most of every day I have. I want to laugh and be happy. I want my life to have some purpose and give back to others and make them smile,” she said.

She read a quote that stated ‘One day you will tell your story of how you have overcome what you are going through now and it will be part of someone else’s survival guide.’

“So don’t ever be afraid to share your story,” she said.

Representatives from the Central Nebraska Relay for Life announced that the Relay event will be held from June 11, 2021 from 6:00pm-9:00pm at Harmon Park in Kearney.