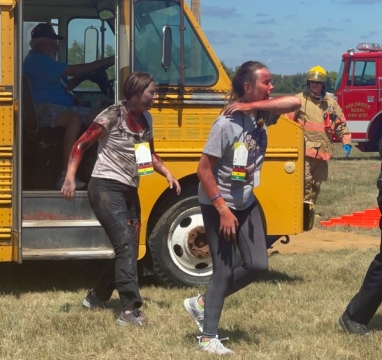 It was only a drill.  A planned exercise and mass casualty disaster scene for area first responders was held on Aug. 20 at Brewster Airfield. The exercise, hosted by Phelps Memorial Health Center, was aimed at sharpening the skills and improving knowledge in mass casualty triage.

Forty-five first responders began their morning in an educational program about mass casualty triage. Lisa Scofield, MPH, Director of First Responder Education at the University of Nebraska Medical Center, told them that anytime an event exceeds your resources a decision has to be made.

“Triage modes are determined based on what resources and personnel you have available,” said Mrs. Scofield.

In her training she referenced several mass casualty events throughout our country including the Las Vegas shooting, Benkelman train derailment, Seward bus rollover, Omaha mall shooting and talked about specific hazards of a rural community such as chemicals or fertilizers.

She said that “If triage isn’t done on scene by first responders, hospitals can be overwhelmed.”

Following the morning education, responders began their drill with the scene of a school bus that collided with a car driven by a drunk driver.  Injuries ranged from mild to severe and included fatalities. Over 25 individuals volunteered to act as victims for the exercise.  Volunteer actors spent the morning getting moulage applied for realistic looking burns, broken bones and other severe injuries.

This mock disaster included a smoke machine under the bus indicating it was on fire and smoke inhalation and burns would be a factor in the care of patients.

First responders triaged patients according to injury, with some transported to Phelps Memorial Health Center so their emergency room could also participate in the drill.  Other volunteer patients were loaded into ambulances, helicopters, or treated on-site.