Back to top
Community Events 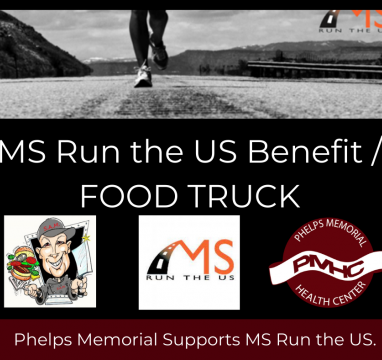 Phelps Memorial will be hosting a benefit for the Multiple Sclerosis Society on Friday, April 23.  Free will donations will be accepted for menu items at the S.A.M. Que BBQ food truck with ALL donations benefitting the MS Society.

This event will be held in conjunction with the YMCA Healthy Kids Day but is open to the entire community from 5:00 pm-7:00 pm on Friday, April 23. Stop by and grab your dinner and support a great cause!

Why do we support MS Run The US? Their organization is dedicated to raising awareness and funds for those living with multiple sclerosis (MS) to provide hope, to aid those living with disabilities from the disease, and to support research to stop it.

Multiple sclerosis (or MS) is a chronic, often disabling disease that attacks the central nervous system, which is made up of the brain, spinal cord, and optic nerves. Symptoms may be mild, such as numbness in the limbs, or severe, such as paralysis or loss of vision. The progress, severity, and specific symptoms of MS are unpredictable and vary from one person to another. People with MS experience a wide range of symptoms. Due to the nature of the disease, symptoms can vary widely from person to person. They can also change in severity from year to year, month to month, and even day-to-day.

MS Run the US, Inc. was founded as a non-profit organization in 2009 by Ashley Schneider, Wisconsin, who was inspired by her mother who lived with MS.

During the event, a team of runners trek across the United States, typically making stops at various locations.  In the past, Holdrege, Nebraska has been one of those locations.  However, due to the pandemic, they will still be running to raise awareness, but will not be making community stops.

All donations received on April 23 will go to the support of MS Run the US and its mission.